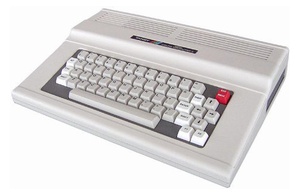 The MiSTer CoCo 3 core was written and ported by Roger Taylor.

Scroll down to download the latest core, or get more live updates in the Mr CoCo facebook group.

The Mr CoCo is the most accurate and compatible CoCo clone available. If you’ve always wanted a real TRS-80 Color Computer, this clone is for you.  It contains a cycle-accurate 6809 core, enhanced GIME core, and many of the things you’d want a CoCo to have onboard like a pair of 6551 chips, AY-8910, Orchestra-90CC, hi-res mouse/joystick adapter, double-sided floppy drive controller, hard drive controller, up to 2MB RAM, turbo CPU mode, and will gain many more cool features.

The RadioShack TRS-80 Color Computer (later marketed as the Tandy Color Computer and frequently nicknamed the CoCo) is a line of home computers based on the Motorola 6809 processor. The Tandy Color Computer line started in 1980 with what is now called the CoCo 1 and ended in 1991 with the more powerful CoCo 3. All three CoCo models maintained a high level of software and hardware compatibility, with few programs written for the older model not running on the newer ones. Despite bearing the TRS-80 name, the Color Computer is a radical departure from the earlier TRS-80; in particular it has a Motorola 6809E processor, rather than the TRS-80’s Zilog Z80.

On July 30, 1986, Tandy announced the Color Computer 3 at the Waldorf-Astoria Hotel in New York City. It came with 128 KB of RAM, which could be upgraded to 512 KB. The keyboard surround and cartridge door plastic were changed from black to grey. The keyboard layout was revised, putting the arrow keys in a diamond configuration and adding CTRL, ALT, F1 and F2 keys. It sold in Radio Shack stores and Tandy Computer Centers for $219.95 (199 CAD in Canada later that year).

The CoCo 3 was compatible with most older software and CoCo 2 peripherals. Taking the place of the graphics and memory hardware in the CoCo 1 and 2 was an application-specific integrated circuit called the “GIME” (Graphics Interrupt Memory Enhancement) chip. The GIME also provided additional features:

Output to a composite video monitor or analog RGB monitor, in addition to the CoCo 1 and 2’s TV output. This did much to improve the clarity of its output.
A paged memory management unit broke up the 6809’s 64 KB address space into 8 × 8 KB chunks. Although these chunks were considered to be too large by many programmers, the scheme would later allow third party RAM upgrades of up to 2 MB (256 × 8 KB).
Text display with real lowercase at 32, 40, 64, or 80 characters per line and between 16 and 24 lines per screen.
Text character attributes, including 8 foreground and 8 background colors, underline, and blink.
New graphics resolutions of 160, 256, 320 or 640 pixels wide by 192 to 225 lines.
Up to 16 simultaneous colors from a palette of 64.