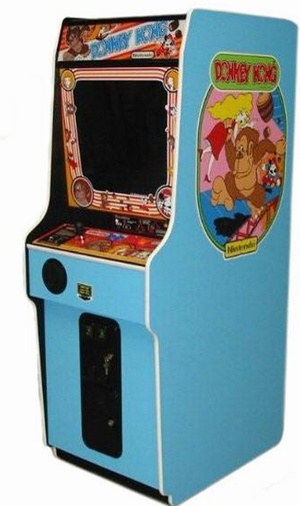 The MiSTer Donkey Kong core was derived from the works of Daniel Wallner.

The original arcade Donkey Kong game was created when Shigeru Miyamoto was assigned by Nintendo to convert Radar Scope, a game that had been released to test audiences with poor results, into a game that would appeal more to Americans. The result was a major breakthrough for Nintendo and for the videogame industry. Sales of the machine were brisk, with the game becoming one of the best-selling arcade machines of the early 1980s. The gameplay itself was a large improvement over other games of its time, and with the growing base of arcades to sell to, it was able to gain huge distribution. In the game, ‘Jumpman’ (the character would later become Mario) must ascend a construction site while avoiding obstacles such as barrels and fireballs to rescue Pauline, his girlfriend, from Donkey Kong. Miyamoto created a greatly simplified version for the Game & Watch multiscreen. Other ports include the Atari 2600, Colecovision, Amiga 500, Apple II, Atari 7800, Intellivision, Commodore 64, Commodore VIC-20, Famicom Disk System, IBM PC booter, ZX Spectrum, Amstrad CPC, MSX, Atari 8-bit family and Mini-Arcade versions. The game was ported to the Family Computer in 1983 as one of the system’s three launch titles; the same version was a launch title for the Famicom’s North American version, the Nintendo Entertainment System (NES). Both Donkey Kong and its sequel, Donkey Kong Jr., are included in the 1988 NES compilation Donkey Kong Classics. The NES version was re-released as an unlockable game in Animal Crossing for the GameCube[citation needed] and as an item for purchase on the Wii’s Virtual Console. The original arcade version of the game appears in the Nintendo 64 game Donkey Kong 64. Nintendo released the NES version on the e-Reader and for the Game Boy Advance Classic NES series in 2002 and 2004, respectively. The game was once more ported to Nintendo consoles Wii, Wii U and 3DS in 2013 and 2014, under the name Donkey Kong Original Edition.