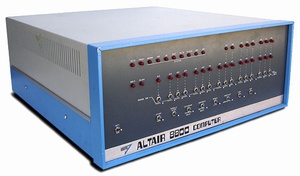 The MiSTer Altair 8800 core was derived from the works of Fred VanEijk and Cyril Venditti.

The Altair 8800 is a microcomputer designed in 1974 by MITS and based on the Intel 8080 CPU. Interest grew quickly after it was featured on the cover of the January 1975 issue of Popular Electronics, and was sold by mail order through advertisements there, in Radio-Electronics, and in other hobbyist magazines.