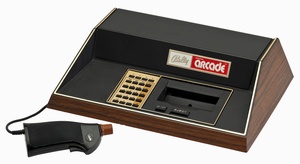 The MiSTer Astrocade core was derived from the works of MikeJ.

The Astrocade is a second generation home video game console and simple computer system designed by a team at Midway, at that time the videogame division of Bally. It was originally announced as the “Bally Home Library Computer” in October 1977 and initially made available for mail order in December 1977.