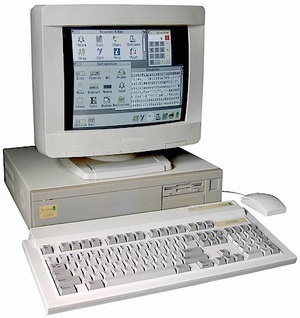 The MiSTer Acorn Archimedes core was derived from the works of Stephen J. Leary.

The Acorn Archimedes is a family of personal computers designed by Acorn Computers Ltd in Cambridge and sold in the late-1980s to mid-1990s, Acorn’s first general-purpose home computer based on its own ARM architecture. The first Archimedes was launched in 1987.

The Archimedes was one of the most powerful home computers available during the late 1980s and early 1990s; its main CPU was faster than the Motorola 68000 microprocessors found in the more popular Commodore Amiga and Atari ST machines. An 8 MHz 68000 had an average performance of roughly 1 MIPS for 16-bit workloads and 0.5 MIPS for 32-bit workloads, with peak performance of 2 MIPS for simpler 16-bit instructions. The 8 MHz ARM2 yielded 4.5–4.8 MIPS for 32-bit workloads in repeatable benchmark tests.

The computer was exhibited at the 1987 Personal Computer World Show, along with Amigas, Atari STs and video game consoles. Commenting on the show, Crash magazine reported that “despite whiz-bang demos of Acorn’s Archimedes” the 8-bit machines were not dead.

The Archimedes won significant market share in the education markets of the UK, Ireland, Australia and New Zealand; the success of the Archimedes in British schools was due partly to its predecessor the BBC Micro and later to the Computers for Schools scheme organised by the Tesco supermarket chain in association with Acorn, and most students and pupils in these countries in the early 1990s were exposed to an Archimedes or A-series computer. The Archimedes range was available in the US and Canada via Olivetti Canada.

Between 1994 and 2008 a supercending model the Archimedes computer, the RiscPC, were also used in television for broadcast automation, programmed by a company named Omnibus Systems Ltd (UK). Original desktop models and custom made 19-inch rack models were used to control/automate multiple television broadcast devices from other manufactures in a way that was fairly unique at the time. It was used at several large European television stations including the BBC, NRK, TMF (NL, UK).

Also between 1994 and 2004 the Archmedes and RiscPC models were used for teleprompters at television studios. The hardware was easy to adapt for TV broadcast use and most of all cheaper than other hardware available at the time.